Here are a few patterns that might explain the current state of the silver price, as well as, provide the possible way forward.

Below is a 6-year chart of silver (all charts generated at fxstreet.com): 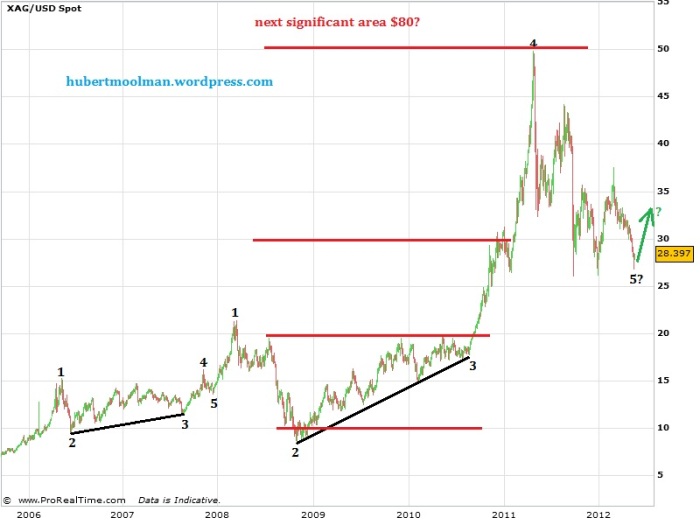 On the chart, I have indicated two similar patterns (marked 1 to 5).This comparison suggests that silver could rise significantly over the next couple of months. This would mean that a dramatic turnaround in the price of silver is coming (it might have started already).

I have also drawn some red lines at the $10, $20, $30, and $50 level. These levels appear to have acted like key levels, where the price of silver has found support or resistance.

The interesting thing about these levels is the fact that they have a Fibonacci relationship. That is a ratio that is similar to the following Fibonacci numbers: 1, 2, 3, and 5. So, if the silver chart continues to follow this Fibonacci pattern, which is often the case, then the $50 level is a very important resistance. Also, if we go past the $50 level, then $80 could be the next significant level, since that will be the next area, if the Fibonacci ratio is to be applied. The $80 area could act as a support or a resistance.

Now, I would like to zoom-in to the last part of both patterns (about point 3 to 5 of both).

Below is a graphic which compares the current pattern on silver (from about the beginning of 2011 to present) to a 2007 pattern: 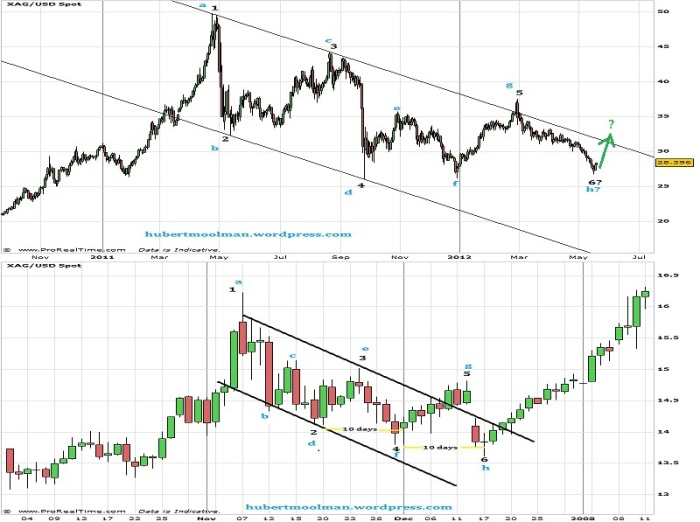 On both charts, I have suggested how the flag  patterns might be similar, by marking similar points, from 1 to 6 (and alternatively from a to f). Based on this comparison, it appears that the silver price is searching for that point 6 (or point f, which might be in already).

These patterns suggest that the current flag pattern (as previously suggested), is important for the future of the silver price. A breakout at the resistance line of the flag could mean that we will have a significant rally, and an eventual breakout at the $50.