For gold to rise to levels significantly higher than the recent high of $1920, a new impetus is needed. Without additional energy from such an impetus, gold could just trade sideways for a very long time, or even fall further.

There is only so much value in the world economy, and it is split between all the different instruments (like gold, silver, stocks bonds, etc.) where value resides.

For gold (and silver) to rise significantly, relative to other instruments of value, value will have to be diverted away from those other competing instruments. The Dow, in particular, has been the biggest obstacle to a rise in precious metals, due to it sucking up most of the available value on global markets.

It is for this reason that the direction of the Dow is an important indicator of where gold will go over the next months. Analysis of the Dow itself, as well as, the Dow/Gold ratio is therefore, essential.

The question, therefore, is whether it is gold or the Dow that will significantly rally from around this area? Below is a long-term Dow/Gold ratio chart:

I have drawn a yellow line at the 10 level. In 1995, when the ratio moved away from the 10 level, it was higher, and it was the Dow that started a massive rally. It was in 2008 at the end of the gold correction that the ratio hit the 10 level again.

It is almost certain that this ratio will move significantly from here, and in my opinion; it is gold that is heavily favoured. Technically, it appears that at the end of 2008 the ratio dropped lower than the important level of 10, which acted as some kind of support level. It is now busy completing the retest of that breakdown, and should the area around the 10 level hold; it will likely go into a free-fall (that is much lower than 10).

The Dow has just recently made an all-time high, and to many, it might appear that this is a start of a multi-month rally. However, the enormous debt-levels will virtually ensure that this rally is brought to an abrupt end very soon.

The Dow is making similar patterns to that of the 70s except for debt levels relative to GDP being much higher today than that of the 70s. Those patterns also indicate that the Dow’s current rally is likely to come to an end, leading to a possible crash.

Below, is one of the comparisons between the current period and the 70s, I have done for the Dow:

The top chart is the Dow from 1968 to 1974, and the bottom one is the Dow from 2008 to April 2013. I have illustrated how these patterns are alike by marking similar points from 1 to 6. If this comparison is valid, then the Dow could top very soon and start a severe decline.

The problem is that it is impossible to predict the exact level or time where the Dow will top. However, there is a good chance the top could be in this month; given the fact the Dow/Gold ratio has reached that important 10 level.

If we do get the decline in the Dow, similar to the 70s pattern, then it is possible that it could be much more severe than that of the 70s due to the extreme debt levels today. During that massive Decline of the Dow, gold actually did very well. See chart below: 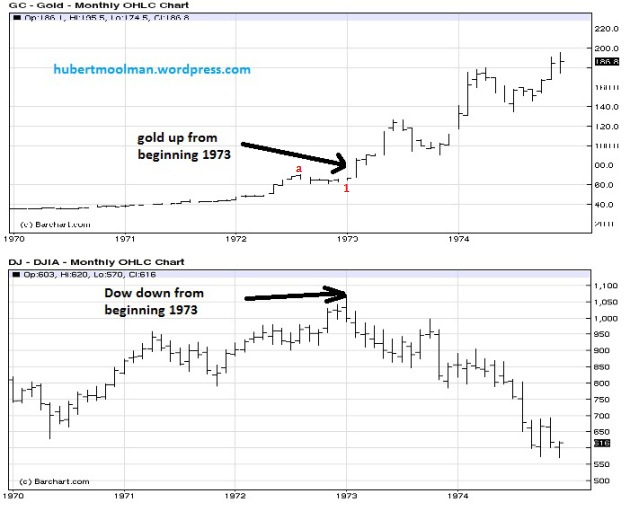 I have compared the gold chart (top) from 1970 to 1975 to the Dow chart (bottom) for the same period. From the beginning of 1973, the Dow started a massive drop, while gold started a huge rally.

Today, gold is in a similar position to that of the end of 1972 to the beginning of 1973 (point 1). Then, the price was in a consolidation that started when gold reached an all-time high of $70 (point a). While gold was getting near the end of its consolidation, the Dow was making all-time highs just like today – see point 1.1.

I am sure many were thinking that the gold price would decline back to the $35 level, while the Dow’s rally continues. That did not happen; in a similar manner, gold will likely not decline much further.

I do not know at what level the gold price decline will stop, but it is likely to be very soon, and it is likely to turnaround in a dramatic fashion. Just like in 1973, the gold bull market is not over. There are a few important signals that will confirm the coming rally in gold and silver. I will be sharing more relevant information regarding these markets with my subscribers over the next couple of days.

For more of this kind of analysis on silver and gold, you are welcome to subscribe to my premium service. I have also recently completed a Long-term Silver Fractal Analysis Report .