Last year, I produced the following chart and commentary (italics) to show how the Dow could crash like it did in 1929: 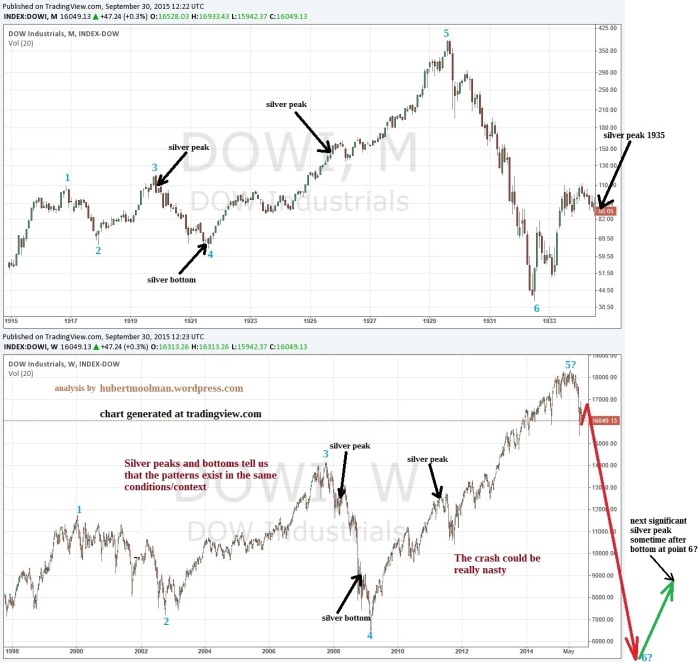 Above, is a fractal comparison between the current period (1998 to 2015) and the 1920/30s, for the Dow (charts from tradingview.com). Follow the two patterns marked 1 to 5. I have also indicated where silver peaks and bottoms occurred, to show that both patterns exist in similar conditions. This means that there is a strong likelihood that the crash will occur.

If the Dow peak is in (at point 5), then it could free fall soon, much like the October 1929 crash. This could be the greatest Dow crash ever. Therefore, the greatest silver rally could be on its way (why?).

Here, I would like to add a little more.

However, after the third silver peak shown (on both charts) there was a big divergence between silver and the Dow. For example, while the silver peaked in 2011, the continued to rally until 2015. See chart of the current pattern to illustrate the moving together and the eventual divergence, below: 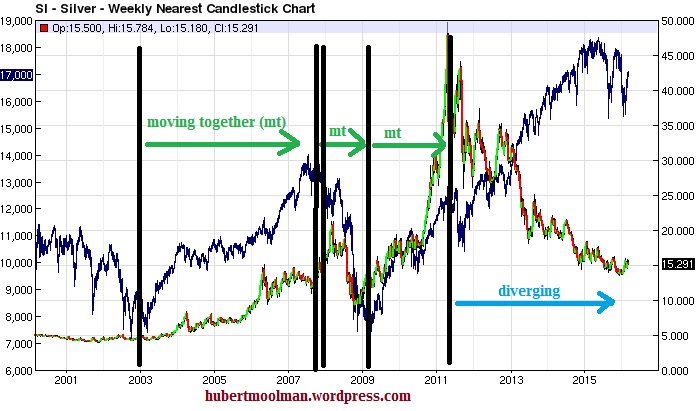 (chart form barchart.com – note the Dow is the blue chart and silver is the green & red one)
The divergence is what should be expected, since silver and the Dow actually moves in opposition in the long-term (contrary to what many believe). This adds to the likelihood that the fractal in the first chart is valid.

So, what significance does this have for the silver price in the future? It will help to determine when silver is likely to peak during the coming silver rally. Based on the fractal analysis on the first chart (above), silver is only likely to peak some time after the next major Dow bottom.

For more of this kind of analysis, you are welcome to subscribe to my premium service. I have also recently completed a Long-term Silver Fractal Analysis Report .