Since at least the early 80s there has been a period of great economic prosperity. Yes, there were many recessions during that period, however, as a whole it has been a prosperous period.

Now, there are many signs that we are likely to get a period of serious economic decline. The type that has not been seen in many a lifetime of those living today.

Previously, I have presented a few of those signs (or measures), and now there has been important development of those since then.

Let’s take a look at silver priced in oil (WTI Crude), the Dow and US dollars:

Above, is silver priced in oil from 1983 to now. Price has moved in a large channel before it broke out in 2008. This is really significant given the length of time involved.

However, more importantly there is a massive rounded bottom which is a good base for the coming higher prices. At the end of the bottoming pattern there appears to be a bullish wedge.

Price has now broken out of the wedge, as well as retraced to the breakout area. A breakout at the top line of the giant cup will confirm a hugely depressed economy (more than all recessions of the last 35 years at least)

Just like for oil, the relationship between silver and the Dow is an important measure of economic conditions.

Here is a chart of silver priced in the Dow: 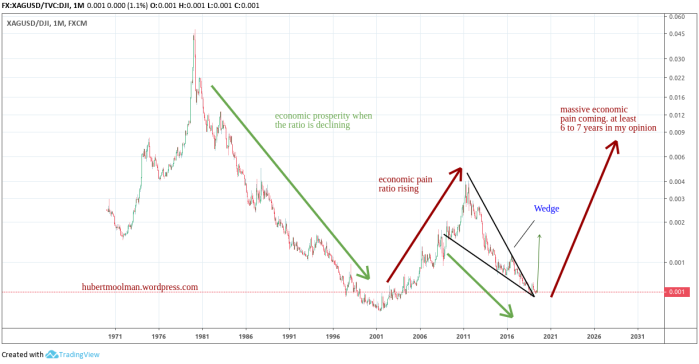 Currently silver priced in the Dow is close to all-time lows. Economic conditions has been favourable to paper and debt-based assets. The bullish wedge is an indication that all this is about to change.

There has now been a breakout of the wedge and the ratio seems ready to go much higher.

On the chart, I have indicated how the periods indicated by the green arrows have been associated with economic prosperity, and the red one with economic decline. Higher silver prices and declining stock prices will virtually guarantee (or represent) major economic pain over the coming years.

The US dollar silver price is currently completing a bottoming process similar to that of 2001 to 2003:

This is indicated by the points marked as 3 to 5, which is forming a triangle pattern. A breakout of the current pattern will likely set off a massive multi-year silver rally.